Showing posts from March, 2019
Show All

March 28, 2019
The Speaker. Rt.Hon Ngonga Martin. East African Legislative Assembly. P.O.Box 1096. Africa Mashariki Road. Arusha,Tanzania. 28 th /March/2019 Salutation Sir. PETITION: ESTABLISH STATUS OF EAST AFRICA RAILWAYS & HABOURS-LAND BUILDINGS AND ASSETS  We are honored to note the commendable work you and the entire EALA are doing, we write to you highlighting a profound sense of responsibility and commitment bestowed upon you by the entire East Africa countries and its founding principles. Thus EALA is a creation of legal framework, thus legality can be defined as compliance with the legal framework in the process and composition of East Africa community. CONSTITUTION OF KENYA Preamble states we, the people of Kenya are Committed to nurturing and protecting the well-being of the individual, the family, communities and the Nation, recognizing the aspirations of all Kenyans for a government based on the essential values of human rights, equality, freedom, democ
Post a comment
Read more 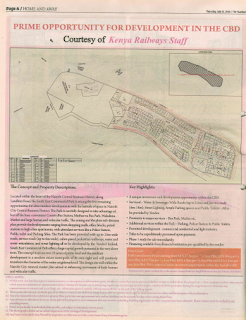 MINISTERIAL STATEMENTS: SALE OF KENYA RAILWAYS CORPORATION HOUSES 2011 NATIONAL ASSEMBLY ·          OFFICIAL REPORT ·          Thursday, 31st March, 2011 ·          The House met at 2.30 p.m. ·          Amos Kimunya  (The Minister for Transport)  Mr. Speaker, Sir, as requested by the Member for Makadara, Mr. Mbuvi, I wish to make the following Statement on the sale of Kenya Railways houses in South B. Mr. Speaker, Sir, some of the Kenya Railways Corporation (KRC) operations were concession to the Rift Valley Railways (RVR) on 1st November 2006.  However, various assets were retained by the corporation. Part of the Government s strategy to improve the corporation's  financial position included the disposal of some of the non-strategic land and assets by outright lease or sale. In order to implement this strategy, an Inter-Ministerial Committee was formed and they prepared a report in September, 2007. This report made recommendations, in
Post a comment
Read more

March 28, 2019
Hon David K Maranga. Chief Justice Republic Of Kenya. Head of the National Council For the Administration of Justice (NCAJ) – P.O. Box 30041 – 00100, Nairobi  Salutation Sir,                    JUSTICE TRAVESTY: 21 YEARS PENDING MATTER ON KENYA RAILWAYS CORPORATION KINDLY REFER: CJ 155/2 DATED 24 TH MAY 2012 On behalf of Muthurwa Residents Welfare Association we are delighted by the commendable work you and the entire Judiciary is involved in, the measure and strides you have undertaken to make Kenya a better society for all is highly commendable. We are delighted and happy to be part of this distinguished process. Kenya Judicial motto is “Balanced scales of Justice ensure transformation” in fulfillment of judicial constitutional mandate as stipulated under Art 159 and responding to high expectations and demands for improved performance, we wish to humbly request for your intervention in regards to 21 years Employment & Labour Court case before Justi
Post a comment
Read more

March 28, 2019
Greetings to all.Pan Africans We call for International Support. The attached below is our letter / Petition to the Chief Justice Hon David Maranga dated 26th March,2019. The letter highlight how United Kingdom Government in 1997 gave a grant of Pound  21,841,427 /= to settle over 22,000 Workforce of Kenya Railways Cooperation,we have highlighted how Uganda Case and  Tanzanian Cases were finalized and how it related to Kenya.  The petition highlight how corruption and underhand dealing have crept back to Kenya Judicially (Fastracking Process) especially a vedict by Justice Nzioki Wa Makau  which he lifted Interlocutory Orders within it  targeting housing rent(Over 9000 Pensioners and Retirees faces evictions in two weeks,) the Orders which was agreed in Collective Bargaining Agreement(1998) issued by Justice Ari Aroni and J Msagha,In December 2018, Justice Nzioki Wa Makau directed by Chief Justice to sit for a week in Nairobi and finalized old cases,instead of fastrack
Post a comment
Read more
More posts